Do you need an Electrician in San Diego? Point Loma Electric is an electrical service company that takes care of all your electrical repairs and service needs. With our licensed san diego electrician, you can count on quality and professional electricians to handle all of your electrical needs.

Our electricians are also highly trained and experienced in all types of Commercial Electrical Repairs. We are also qualified San Diego electrical contractors who specilize in working on and upgrading electrical systems of older homes. As a full service Residential Electrical Contractor, we are able to troubleshoot, repair and upgrade your home wiring. All of our highly trained and licensed electricians are carefully screened and tidy in both their appearance and their work.

With Point Loma Electric, you can expect the highest quality of work. We are family owned and operated and take great pride in providing excellent service, quality workmanship and fair upfront pricing. The price we quote you is the price you will be charged, even if the job takes longer than anticipated or unexpected challenges arise.

We do not cut corners and stand behind our work. We have been serving the Electrical Service and repair needs of the greater San Diego area since 1988 and have hundreds of satisfied repeat customers. We are not only committed to your complete satisfaction, but to our conscience. We care about your home and your safety and insist that things are done correctly the first time. Contact Point Loma Electric, your highly proficient San Diego electricians and local electrical contractors.

Master Electrician, James Dent is the owner of Point Loma Electric. James Dent began his electrical career in the summer of 1971 in his hometown in Northern Virginia.

To say that they know their stuff is an understatement. They rewired my mother's mid-century house and were not only thorough, but incredibly helpful and kind. My mother was so happy with the work and I am very happy to know she has a company she can rely on in the future.

We had multiple electrical issues in our old house. Called Point Loma Electric because we heard an ad that said they specialize in older houses and ours was built in 1961.
The electricians were very professional, took their time and explained everything to us so that we could understand what they were going to do and what they found. He quoted us a repair cost and even though it took longer than he expected it to, the price didn't change. Afterwards he cleaned up really well and made sure we are all good. He also took a look at our panel and the entire rest of our electrical system. Made some suggestions for upgrades which we will do in the future. It was a very positive experience and I'd use them again and recommend them to others.

Taylor R. and Mike M. from Pt. Loma Electric did a great job completing several projects for me. They were both very courteous and professional while working in my home. This was my first time using Pt. Loma Electric and I will not hesitate to use them in the future.

Point Loma Electric is hands-down the best electrical contractor in southern California. They are knowledgeable, skilled, professionals who arrive promptly; work quietly and efficiently, and finish on-time. You are wasting your time with anyone else than PLE.

National Day of Giving is a special day set aside before the real hustle and bustle of a busy holiday season starts https://t.co/0ncUzk8J9d
Twitter   Full Post › 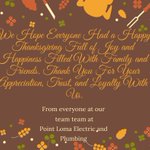 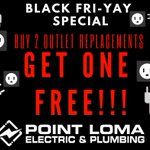 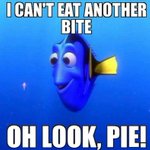 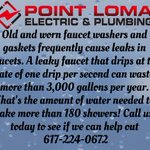 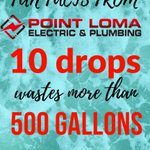 Trust your home's electrical and plumbing service needs to Point Loma Electric and Plumbing. Give us a call today at (619) 224-0672 to experience our award-winning service for yourself! With over 30 years' experience and our 'done right or we make it right' guarantee, Point Loma Electric and Plumbing is the right choice for all your Electrical and Plumbing needs. We take all the guesswork out of paying for your plumbing or electrical service with honest, up-front prices! Our technicians discuss pricing before they begin any work, so you know exactly what to expect.

At Point Loma Electric and Plumbing we pride ourselves on providing top notch plumbing and electrical services. We always put our customers first and ensure safety and satisfaction on every call. We realize that every customer has different electrical and plumbing needs. When you are making decisions as important as those concerning your plumbing and electrical systems, the more informed you are, the easier it is to make decisions. Our licensed electricians and plumbers will provide you with all the information you need to make informed decisions about your home's electrical and plumbing systems.

Electrical systems don't seem that complicated on paper. They are made up of three simple parts. The electrical company, the electrical wire, and the electrical box. However, when you open up that circuit breaker box, you start to understand the complexity that is your electrical system. It is highly recommended not to ever try to service your own breaker box. That is something that should always be left up to the professionals. For those located in the San Diego area, Point Loma Electric and Plumbing are the trained and trusted professionals to call.

From the lights in your kitchen to the outlets in your living room, keep your electrical system at its best with expert electricians from Point Loma Electric and Plumbing! Owning a home means being faced with a variety of problems. In most cases, it's something simple like an overflowing toilet. But when it comes to your electrical system, these issues may become a bit more severe. You rely on your electricity to power your appliances, charge your devices, and keep the lights on. When there's an issue caused by an outdated electrical panel or faulty wiring, you not only lose access to all those necessities but also put your own safety at risk.

Keep your home at its best with reliable plumbing care from your experts at Point Loma Electric and Plumbing. An important part of owning a home is knowing how to tackle those unexpected problems. For many homeowners in the San Diego area, this includes your plumbing system. While most people only think about their toilet or water heater when considering the plumbing system, there is a lot more that goes into it. Not only can a plumbing issue leave you without the use of some of the best areas in your home, like the kitchen and bathroom, but in some cases, it can cause extensive damage to your valuables and even your electrical systems.

Wildfire season is approaching, and with the California Utilities launching unprecedented planned power outages, homeowners are scrambling to be prepared. You don't fully realize your dependence on electricity until the power goes out. Refrigerators, freezers, medical devices, phones, lights and computers, how will you keep them up and running during a power outage or failure? With a whole home generator or a standby generator with a manual transfer switch, you can be prepared for both planned and unplanned power outages.